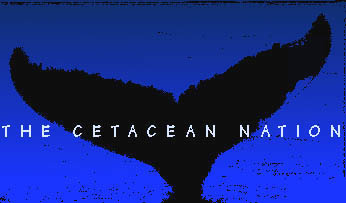 The Cetacean Nation name was born out of the incredible mind of world known dolphin researcher, writer, philosopher, neurophysiologist and cultural icon, Dr. John C. Lilly (1915-2001). The following founding statement was composed with Michael Bailey and Roberta Quist-Goodman in 1993:

The rights of man have slowly developed over the last few centuries. The rights that each of us enjoys today in the United States have been carefully developed in our laws. Our past history teaches us that our rights evolved through certain stages, from the unconscious acceptance of a lack of rights, to the conscious awareness of the need for adequate expression of an intolerable situation or state, to the demand for the relief articulated in law, to the law and its adequate administration.

As each group of humans, through its own experience, learned to feel its lack of sharing in the benefits of laws and their administration, each developed adequate spokesmen or spokeswomen for its cause. These individuals were either inside or outside the group needing relief.

This same situation can now be seen reflected in the existence of cetaceans. Recognized as having brains which are in some ways even more biologically complex than humans, and having complex social structures, languages and socials behaviors which are also at least as complex as humans, the question remains: should cetaceans be given individual rights under human laws?

The size and complexity of the cetacean brain has been known for many years. Only recently has microscopic analysis shown that their cellular densities and connections are quite as large and complex as our own.

Throughout history, through to the present day, human beings have conducted large-scale acts of genocide upon each other. Even today, in many parts of the world, we can observe the mass slaughter of our own species. BosniaHercegovina, Somalia and Cambodia are but a few examples of this. At the same time, a similar mass-annihilation of highly evolved intelligent and sentient creatures, the whales and dolphins, can also be seen throughout our world.

The future of many species of whales and dolphins is in question. The Baiji, or Yangtze River Dolphin, the Vaquita dolphin found in the Sea of Cortez, and the North Pacific Right Whale are but a few species whose chances of being completely exterminated from our earth during the next two decades is almost a certainty.

To insure the survival of cetaceans, in light of the continuous onslaught by their terrestrial counterparts, human beings, it is essential that cetaceans be recognized for what they truly are: non-terrestrial intelligent lifeforms. Lifeforms which do indeed have the same inherent rights that human beings have to survive and to live in peace.

To attain this goal, it is essential that the cetaceans attain a status in human society in which they are recognized as the intelligent lifeforms that they are. It is with this goal in mind that a Cetacean Nation is now being initiated.

The purposes of a Cetacean Nation are:

1) To foster greater understandings of the minds and consciousness of whales and dolphins;

3) To gain recognition from the international human community to the inherent rights that cetaceans have, which include:

- Freedom to live in their aquatic world and nurture their young

- Freedom to echo their own thoughts on their futures

That these goals may be achieved in time to actually insure the preservation of most species of whales and dolphins, a series of endeavors should be initiated.

These endeavors would include:

3) Organizing of electronic databases, libraries and international forums for the advancement of communication studies between human beings and cetaceans.

4) Worldwide distribution via the mass media, electronic communications networks and through personal communications, current information on the technologies, techniques and existing and past projects whose purpose is to enhance human-cetacean understanding and communications.

The eventual goal is to have cetaceans represented as a nation within the framework of the United Nations. This goal will most likely only be fully achieved once consistent communication links with any one of the many species of whales or dolphins has been established.

One possible series of steps involved with gaining recognition for Cetaceans within the United Nations would be:

Step 1) Recognition by individual human beings of the need for eventual cetacean representation at the United Nations and other global forums;

Step 2) Gaining recognition, via letters and endorsements for the Cetacean Nation from Non- Governmental Organizations and other geo-political groups;

Step 4) Recognition within human governments and within international conferences and forums for the need to explore and research the possible methods of establishing consistent communications with cetaceans so that they may receive the recognition of deserved.status.

Step 5) Recognition and validation of the Cetacean Nation through the passage of resolutions at international conventions, conferences, or other similar forums.

Step 6) Recognition, via letter or other endorsements, from one or more member countries within the United Nations for such representation

Step 7) Recognition of cetacean species as a nation and separate group intelligent, sentient beings that should be afforded rights to survival and happiness in keeping with those afforded human beings in modern democratic societies.

The possibilities of this seven step plan being achieved are significant, providing there is sufficient interest and support from we human beings who wish to accomplish these goals on behalf of our cetacean co-species.

To initiate this global endeavor, the wide-base of dolphin communications studies needs to be consolidated, compiled and libraried in such a manner so that researchers and laypeople may have access to the developments of cetaceans communications that have occurred over the past 30 years.

The Human/Dolphin Foundation library of information and materials is being consolidated, along with libraries of information garnered from others who have also engaged in cetacean communications projects and endeavors.

All manner of cetacean communication research will be compiled, libraried and analyzed. This research and information shall include:

- Video, film and sound recordings of cetacean/human interactions via music, audio times and other acoustic mediums.

- Proven and possible usages of existing and future communication technologies

- Personal accounts and experiences of human/cetacean communications through the mind

Much of the current cetacean-human communication efforts are limited in their scope, largely due to their limitations in information availability. For example, various researchers periodically publish scientific papers on their communications studies, yet these studies are seldom read by others who are conducting musical or acoustic interaction, or who are developing communications and interactions via swimming with cetaceans in their aquatic realms.

There are also people who are working towards engaging in mind-connections or other interactions with dolphins and cetaceans, who are unaware or do no know how to access information pertaining to acoustical communications which are presently being conducted or which have been conduced in the past. In short, many of the people who are working towards trying to develop new technologies, methods and strategies for human-cetacean communications are unaware of the advances and results being made by others.

Moreover, many of these researchers and investigators are also unaware of the methods of communication that have been implemented and used by Dr. John Lilly and the Human- Dolphin Foundation, and as such some of the efforts of Dr Lilly are being unnecessarily replicated by others.

In order to expedite the needed breakthroughs in human-cetacean communications, reduce duplication of efforts, as well as develop consistent communications with cetaceans, an electronic databank and information center needs to be established.

The role of this information center would be:

1) To compile, organize and library existing information from the United States, Europe, Russia, Australia, and other parts of the world where cetacean communications studies have been conducted.

Presented to the legislative body for the recognition of the Sovereignty of the Kingdom of Hawai'i by Michael Hyson, Paradise Newland and Napier Marten.

Constitution of the Kingdom of Hawai'I

Article I. The Rights of Citizens

Section 4. Recognition of the Cetacea as a Sovereign People -
the Cetacean Nation.

a) Whereas the Kingdom of Hawai'I resides in a unique sacred region of land and sea; and whereas we recognize both our dominion and stewardship of our precious environment, whose sustenance and wellbeing are fundamental to the manifestation of all the rights of the people of Hawai'I previously stated; therefore, all effects of our actions on our Kingdom and environment will be wisely considered out to the seventh generation to insure the continued wellbeing of our 'aina and waters.

b) Whereas the Cetacea (whales and dolphins) are an ancient race of intelligent, sentient beings, who have been the friends and helpers of mankind for millennia, we hereby accord to the Cetacea the status of a Sovereign People as the Cetacean Nation, whose citizens are, therefore, entitled to the same rights as are accorded our own citizens, as honored guests of the Kingdom of Hawai'I, when residing in our waters. Henceforth, the Kingdom of Hawai'I recognizes the Cetacean Nation, and its right to enter into treaties, establish embassies, appoint ambassadors, and, in short, perform all activities of a Sovereign Nation.

c) The Kingdom of Hawai'I hereby establishes diplomatic relations with the Cetacean Nation through their appointed representatives, both human and cetacean, and through direct communications with the Cetacean citizens themselves, and will enter into treaties and perform other actions as deemed necessary to the recognition of the Cetacea as a People and a Nation.

d) We extend our Aloha to the Cetacean Nation. The rights to liberty and life in a clean environment of all living Cetacea will be held sacred; their rights to travel, their right to free assembly, and their right to practice their cultures freely in Hawai'ian waters, will be honored.

e) The Kingdom of Hawai'I will be a friend and ally of the Cetacean Nation and support the extension of their rights to all waters of the Earth, and in the halls of Mankind everywhere, for all time.

f) We reserve the right to extend similar rights to other peoples as well as the right to promulgate other measures to assure the wellbeing of our environment and our right relationship with it, as the need may arise.

is committed to implementing the above itinerary.

Declaration of Rights for Cetaceans: Whales and Dolphins

Keep checking back as this network grows inward and outward.
- dolphinus